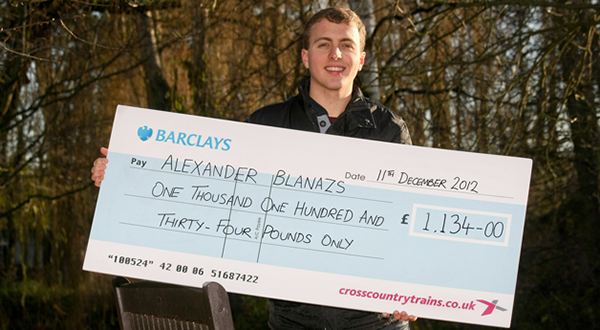 Alexander Blanazs, a second year Chemistry student studying at the University of York is celebrating an early Christmas present after winning the CrossCountry and NUS competition to 'Live Rent Free' for an entire term.

The competition, hosted on the CrossCountryStudent Rail DealsFacebook page, gave students up and down the country the opportunity to win up to £1,500 to cover a term's rent and received more than 10,000 entries in total.

Alexander, from Cannock in Staffordshire, said: "I can't believe I have won. Being able to 'Live Rent Free' for the first term of 2013 is going to make a huge difference, especially with the cost of living being so high these days. It's such a relief to think I'll be starting the New Year with a little extra in my bank account, now my rent is taken care of!"

CrossCountry runs services to and from some of the most popular university cities, including York. Thousands of students across the UK have taken advantage of the exclusive CrossCountry discount for NUS, Graduate and Apprentice extra card holders, which gives them an extra 10% off CrossCountry Advance tickets in addition to the 16-25 Railcard discount. For students on the go, CrossCountry's free Train Tickets mobile app provides train times and information on live departures for all National Rail journeys, making it even easier to plan a trip to visit family and friends.

Carol Blackburn, Partnership Manager at CrossCountry said: "We know that cash-strapped students are always looking for the best deals on their train travel, with thousands already taking advantage of our exclusive NUS deal on CrossCountry Advance train tickets. We wanted to celebrate this partnership and give one lucky student a term's rent for free too - we are thrilled for Alexander and wish him all the best with his studies.

CrossCountry has developed an exclusive deal for NUS, Graduate and Apprentice extra card holders giving students an extra 10% off Advance tickets with CrossCountry and Grand Central in addition to the discount they already get with a 16-25 Railcard. Visit crosscountrytrains.co.uk/nus for more details on how to buy discounted train tickets or apply for an NUS extra card.

For students on the go, CrossCountry's freeTrain Ticketsmobile app provides train times and information on live departures so there really is no excuse for missing that train home this Christmas.

CrossCountry started operating on 11 November 2007. The franchise, which is the most extensive in the UK, will run until 31 March 2016. For further information on CrossCountry services and future franchise plans log on to www.crosscountrytrains.co.uk.

CrossCountry is part of the Arriva group, which is owned by Deutsche Bahn. Arriva is a leading pan-European public transport operators with more than 42,000 employees and operations across 12 European countries. The link to Arriva is www.arriva.co.uk. The link to Deutsche Bahn is www.deutschebahn.com.

CrossCountry bookings - passengers can book any rail journey, with any train operator for anywhere in Britain with no booking fee through CrossCountry's website and also their free Train Tickets app. Visit your app store to download the CrossCountry app.

If your browser does not recognise the file type PDFa free Adobe Acrobat Reader can be downloaded from the Adobe website.