Two of the region’s biggest transport providers have joined forces to offer even easier access to the North East’s largest airport, Newcastle International. Working in conjunction with Nexus, CrossCountry’s portfolio of Mobile Tickets (m-Tickets), on Sunday (20 May), expanded to include through tickets to the award-winning airport.

A full range of connectional Advance tickets from CrossCountry-served regions will be available direct to Newcastle International Airport, with connections at Newcastle Central to the Airport via the Tyne & Wear Metro service. The new fares will provide passengers departing from and arriving into Newcastle International the ability to purchase and use combined Metro and train tickets directly on their phone, rather than purchasing separate tickets for travel.

Customer Services Director at Nexus, Huw Lewis, said: “I’m delighted to team up with CrossCountry to provide travellers with a seamless transfer via Tyne and Wear Metro. Metro links Newcastle International Airport to Central Station in 25 minutes - one of the fastest airport to city transfers in the country, with up to five trains an hour from early until late.  It’s a hugely popular route that that links our region to the rest of the world.”

Ben Simkin, Commercial Director at CrossCountry, said: “This is an exciting opportunity that will make the connection for passengers arriving into Newcastle Airport far easier to join the rail network. It will allow a seamless journey to and from the CrossCountry network, and the fact these new tickets are available as m-Tickets, will mean there’s no need to queue at ticket machines. We’ve also introduced a new range of Advance fares that are available to and from the airport to a wide range of destinations.  An example journey might be York to Newcastle Airport which can be done in just under 1hr 45mins, avoiding the need to tackle the busy roads”.

Graeme Mason, Planning and Corporate Affairs Director at Newcastle International Airport, said: “The launch of these new combined m-Tickets is fantastic news for travellers to and from Newcastle International Airport. We recently launched our Draft Masterplan 2035 which includes details on improving ground transport across the region and beyond and direct ticketing plays a big role in that. It’s now never been easier for travellers to make their way to the airport and explore the world, or for visitors to the region to access all that the North of England has to offer.” 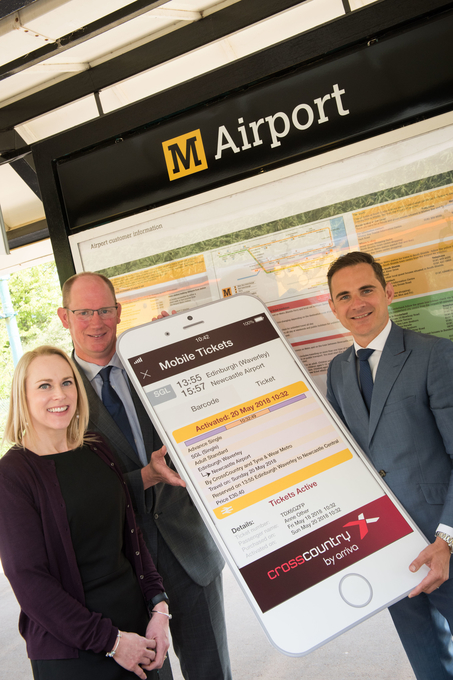