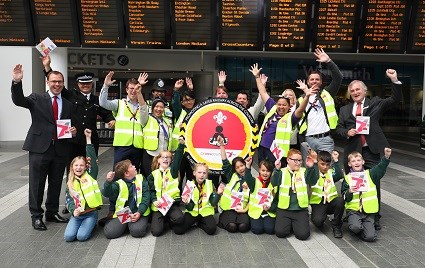 The partnership is a response to the record number of trespassing incidents that were recorded on Britain’s railways in 2016. Figures from Network Rail and British Transport Police figures show an 11% rise in incidents to 8,265, compared with 2015, with young people more likely to take a risk on the tracks.

In an effort to encourage Britain’s younger generations to be safe and understand more of the potential dangers when on or near the railway, especially as we approach the school holidays, CrossCountry and The Scouts Association will be producing educational material for the Cub Scouts’ 150,000 members aged 7-10. Learning about these dangers and how to act responsibly and safely will help the Cubs Scouts achieve their Personal Safety Badge – one of the most popular badges in Scouting.

The partnership was launched at Birmingham New Street Station, where local Cub Scouts along with representatives from CrossCountry, BTP and Network Rail, were joined by Paralympian Multi Medalist Simon Munn, who tragically lost his leg after an accident on the railway.

You can find out more about the launch here: http://www.xc-hub.co.uk/

Speaking about the importance of keeping safe on the railways, Simon Munn commented: “Railways can be a dangerous place and not a playground. We’re all responsible for keeping young people and those who live or work near the railway safe, so we must do all we can to raise awareness of how to stay safe on the railway.

“We must work harder to keep young people safe by making them aware of the dangers that exist. Taking a short cut or messing around on the tracks can result in serious life-changing injuries or even death.”

CrossCountry’s managing director, Andrew Cooper, said: “Safety on the railways is our top priority, so we’re delighted to be able to work with the Scouts Association to help our nation’s children understand the dangers of not being safe and responsible.

“This partnership and the Personal Safety Badge will be promoted everywhere our train goes, taking the message across Britain to stay safe when on or near the railway. To young people the railway can be a place of wonder and excitement, but it is also a place of heavy engineering, fast moving trains and electric cables. In such an environment the dangers of injury or worse are too great for people to think about not acting responsibly.”

Cub Scout Rachel Ruixi-Chen, aged 9, who attended the event at Birmingham New Street, said:“The new station is really cool – and so was the train! But what I learned was it’s not a place to play. They are real tracks, with real trains and could be really dangerous.” 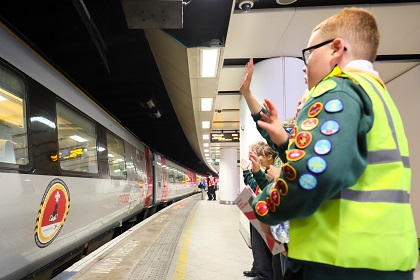 Assistant Chief Constable Robin Smith from BTP said:
“Keeping young people safe is a priority for us and we are doing everything we can to prevent them from coming to harm on the railway, including patrolling trespass hotspots and going into schools to warn of the dangers.

“However, we cannot tackle this issue alone and we are always keen to support any initiatives aimed at reducing trespass. We hope the Personal Safety Badge will help youngsters spread this important safety message within their communities and stop children risking their lives on the tracks.”

Priti Patel, Network Rail’s head of safety for LNW said: “It was great to see so many cubs and scouts so enthusiastic about rail safety. We fully support this initiative to spread vital rail safety messages in such an engaging and meaningful way.”

The partnership between CrossCountry and The Scout Association will enable all Cub Scout Packs in the UK to get hold of new support material to help them complete the requirements of the Personnel Safety Badge.

After the launch alongside the newly-branded CrossCountry train with the Scouts’ Personal Safety Badge emblem on the train’s sides, the Cubs Scouts received a behind-the-scenes tour of the station by Network Rail.

About The Scout Movement