EASIER TRAVEL TO LEEDS BRADFORD AIRPORT IS ON ITS WAY

From 28 January people traveling to and from Leeds Bradford Airport can take advantage of easier and more affordable journeys when traveling by rail, with a bus connection. Arriva Group operators, CrossCountry and Yorkshire Tiger, have come together to introduce a new range of Mobile Tickets (m-Tickets) to include through ticket options for the airport.
Offering simpler, cheaper journeys to and from the airport can only make Leeds Bradford Airport a more attractive place for people planning to fly to the many domestic and European destinations that can be reached from there.
A full range of discounted Advance tickets will be available direct to Leeds Bradford Airport, including the bus connections from Leeds Station using Yorkshire Tiger services. The new fares offer customers a cheaper and quicker way to plan their journeys to and from the airport, as using m-Tickets bought on their phone means not having to queue for tickets at the station.

Leeds Bradford Airports Corporate and External Affairs Manager, Phil Forster, said:
“The launch of these new combined m-Tickets is great news for travellers to and from Leeds Bradford Airport. We continue to work closely with all our partners to deliver better connections to the road and rail network, making it easier for passengers across the Leeds City Region and beyond to access their local airport.
Air travel should be part of an integrated transport network, and enhancing surface links, including better connectivity to both our region’s gateways, is key to unlocking the full economic potential of the airport by making best use of existing capacity.”
Managing Director of Flying Tiger, Matt Ashton, said: “I’m delighted that we’ve teamed up with CrossCountry to provide travellers with a seamless transfer ticket. The Flying Tiger 757 service links Leeds Train Station to Leeds Bradford Airport with buses departing up to every 20 minutes, 7 days a week. It’s a hugely popular route that is one of the fastest city to airport transfers in the country, and we’re proud to be working with CrossCountry to connect Yorkshire with the rest of the world.”

Ben Simkin, Commercial Director at CrossCountry, said: “We are delighted to be able to provide customers travelling to and from Leeds Bradford Airport with easier affordable travel options. The new m-Tickets mean customers will no longer need to queue at ticket machines and can chose from a wide range of cheaper Advance fares to and from the airport and the many places our trains serve.” 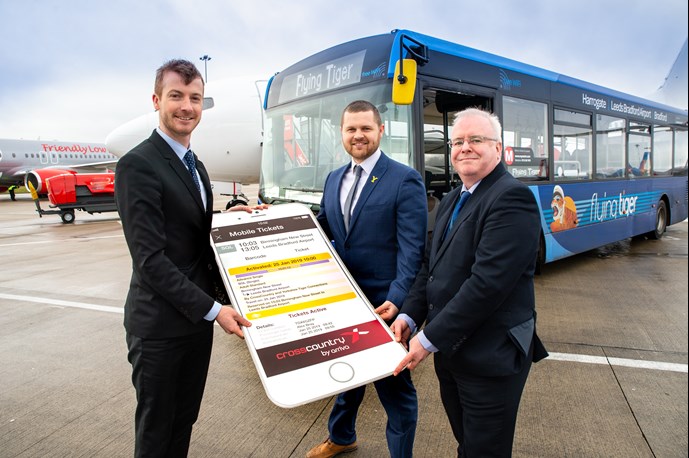 Notes to Editors:
CrossCountry’s network is the most geographical-extensive passenger rail franchise in Britain. Stretching from Aberdeen to Penzance and from Stansted to Cardiff, it calls at over 100 stations. Based in Birmingham, CrossCountry connects seven of the Britain’s 10 largest cities and delivers 298 services every weekday, equating to some 38 million passenger journeys a year.
For further information on CrossCountry services visit crosscountrytrains.co.uk or follow them online via Twitter at @crosscountryuk or Facebook.com/crosscountrytrains
CrossCountry is part of the Arriva group, one of the leading providers of passenger transport in Europe. Arriva employs more than 60,000 people and delivers over 2 billion passenger journeys across 14 European countries each year