Home > About us > Press > The Great North tops the list of places to visit in 2016 but how well do we know Great Britain?

The Great North tops the list of places to visit in 2016 but how well do we know Great Britain?

Edinburgh, York and Manchester* are the places Brits would most like to visit for the first time according to a survey from CrossCountry.

One in five (20%) want to explore more of Great Britain and next week the leading train company launches the start of its Doors Opening campaign, encouraging travellers to explore the many locations on its network to discover somewhere new.

"As we start to say goodbye to winter it's time to look ahead to the spring and get back to the great outdoors. With many of the northern cities along our route offering a mix of cosmopolitan hotspots and beautiful countryside there's something for everyone" said Emma Rudge, Customer Service Manager from CrossCountry.

Despite some being bitten by the travel bug the survey of over 2,100 Brits revealed we don't know our beloved Great Britain as well as we might think…

When asked to identify the location - from a photograph - some respondents struggled to correctly point out where it was:

So how well do you know Great Britain; can you identify the destinations in the photographs below? 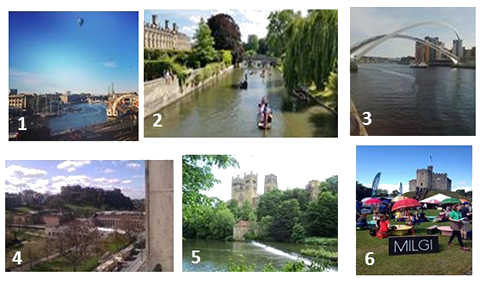 Why take the train? According to the research most people's favourite thing about train travel was the opportunity to see the British countryside (48%) and for more than one in three (39%) it was arriving at your location / city centre without having to worry about parking your car that topped their list.

"We're encouraging people to explore more of what Great Britain has to offer. Travelling by train means you can sit back, relax and arrive hassle-free and ready to uncover a hidden gem.

"Our network stretches from Aberdeen to Penzance, and from Stansted to Cardiff, calling at over 100 stations so the choice really is endless. Now is the perfect time to book in advance for travel in spring and to get the best deal," added Emma Rudge from CrossCountry.

The research was conducted by CrossCountry and Censuswide on a sample of 2,126 adults aged 16-55+ in January 2016.

The CrossCountry network is the most extensive passenger rail franchise in Britain. Stretching from Aberdeen to Penzance, and from Stansted to Cardiff, it calls at over 100 stations. Based in Birmingham, CrossCountry connects seven of the Britain's 10 largest cities and delivers 295 services every weekday, equating to some 32 million passenger journeys a year. For further information on CrossCountry services visit crosscountrytrains.co.uk or follow them online via Twitter at @crosscountryuk, Facebook.com/crosscountrytrains and their student Facebook page, Facebook.com/studentraildeals.

Passengers can buy tickets for any rail journey in Britain, with any train company and with no booking fee at crosscountrytrains.co.uk or via the free CrossCountry Train Tickets app.

Download the app by visiting your app store or by texting TRAVEL to 87080.

You can download a PDF version of the press release here.

If your browser does not recognise the file type PDF a free Adobe Acrobat Reader can be downloaded from the Adobe website.