Buy train tickets for any journey in Great Britain

There have been no recent searches performed, your recently searched journeys will appear here.

Looking for dates further in the future?

Train operators can only release tickets for sale up to 90 days in advance.

But don't worry, you don’t have to miss out - Be the first to hear when tickets are available with our FREE ticket alert.

E-mail me when tickets become available Back to calendar 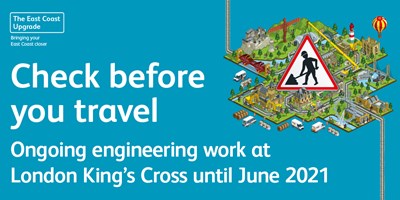 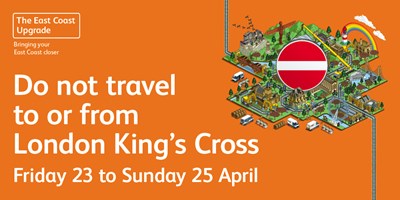 The work is being undertaken as part of The East Coast Upgrade and is due to be completed later this year.

This page includes information about the works, planned closures on the line, travel advice and frequently asked questions.

Details of the works and how your journey may be affected can be viewed below:

A temporary reduced long-distance timetable will operate on services to and from London King’s Cross while we install the redesigned track layout around the station.

No services to or from London King’s Cross.

No services to or from London King’s Cross, Moorgate or St Pancras via Finsbury Park.

A temporary reduced long-distance timetable will operate on services to and from London King’s Cross while we install the redesigned track layout around the station.

No services to or from London King’s Cross or St Pancras via Finsbury Park from the early afternoon.
No services between Stamford and Peterborough, while work is carried out on the new tunnel at Werrington, north of Peterborough. Many passengers will need to transfer to rail replacement services for part of their journey.

No services to or from London King’s Cross or St Pancras via Finsbury Park.
No services between Grantham and Peterborough on the East coast Main Line and between Stamford and Peterborough, while work is carried out on the new tunnel at Werrington, north of Peterborough. Many passengers will need to transfer to rail replacement services for part of their journey.

Why are you doing this work? +

The East Coast Main Line is one of the UK’s vital rail routes. Carrying more than 20 million passengers a year, it connects East and West Yorkshire, the North of England and Scotland with London and the South East.

The £1.2 billion East Coast Upgrade investment programme includes upgrading and expanding the rail infrastructure on the approaches to London King’s Cross station, as well as major projects at other key parts of the route. The work will mean more trains will be able to run between London, the North of England and Scotland.

To deliver this we need to undertake major works, including at London King’s Cross station, where tracks and other infrastructure, which is more than 40 years old, will be upgraded to increase the network’s resilience and improve reliability for passengers.

The engineering work to improve the line has already been going on at night and over weekends for many months, but in the coming months we will be at the stage where we cannot complete the upgrades at King’s Cross and elsewhere on the line without carrying out some major work during weekdays too.

What work is being done? +

Network Rail is upgrading the tracks, overhead wires and signalling on the approach to London King’s Cross station.

In addition, the track is being re-laid in a new layout which will improve journeys in and out of the station. A disused tunnel is being reopened, providing six tracks into the station instead of the current four. This will increase reliability and enable trains to arrive and leave more rapidly, helping to keep trains on time.

At Werrington, just north of Peterborough, we’re building a tunnel and a new section of railway so slower freight trains can dive under the busy East Coast Main Line instead of having to cut across it. Once finished, it will free up space for extra passenger services.

We’re also boosting the power supply along the East Coast Main Line to enable additional faster, quieter and cleaner electric trains to run by carrying out work at a total of 46 sites along the whole route.

When will all this work be finished, and when will I be able to see the benefits? +

The East Coast Upgrade programme is made up of several different major projects along the route, which together will deliver the full benefits once all are complete.  The extra lines and improved track layout at King’s Cross will increase reliability of trains from Summer 2021, whilst further improvements will be delivered by different elements of the programme, such as the Power Supply Upgrade, and will add benefits from future timetable changes.

How will passengers be affected? +

The East Coast Upgrade will need the temporary closure of individual tracks and platforms at King’s Cross every day, including weekdays, for three months between Monday 1 March and Friday 4 June 2021.

There will be a slightly reduced weekday peak-time service, but off peak services will be less impacted. This will mean changes to LNER, Great Northern, Thameslink, Hull Trains and Grand Central services.

Closures are also taking place on the weekends of April 23-25 and June 4-6, when limited or no trains will be able to run into King’s Cross. On some occasions, alternative services will be provided, such as buses and coaches, or trains on alternative routes.

We appreciate that this will unfortunately cause significant disruption for passengers, but this minimises ongoing longer-term disruption and delivers passenger benefits as quickly as possible.

Customers are advised to plan and check before travelling. The biggest impact will be on people travelling at busier times, so passengers will be advised to travel outside of these times where possible.

Will Kings Cross also be closed on some Fridays? +

Yes – the scale and complexity of some of the key parts of the Upgrade means that they will take longer to carry out than the time available to us on a Saturday and Sunday.

Will this work mean that fares will be going up? +

The East Coast Upgrade is a £1.2 billion investment in infrastructure being made by the UK Government. Decisions on fares are made separately. Fares will not be rising because of this vital upgrade work.