Home > About us > Press > Newlywed key workers surprised on CrossCountry

Tom met Victoria and Brett Seithel at Derby while on their journey from Sheffield to their honeymoon destination in Cornwall, presenting the happy couple with a complimentary bottle of champagne.

The couple have worked constantly throughout the Coronavirus pandemic, Brett a Physician Associate and Victoria for a Christian charity, and have witnessed the true effects of the virus with Victoria’s mother contracting it early on.

As the pandemic affected their wedding and honeymoon plans, Victoria wrote to Tom asking if there was anything he could do to brighten the journey to start their new life together. 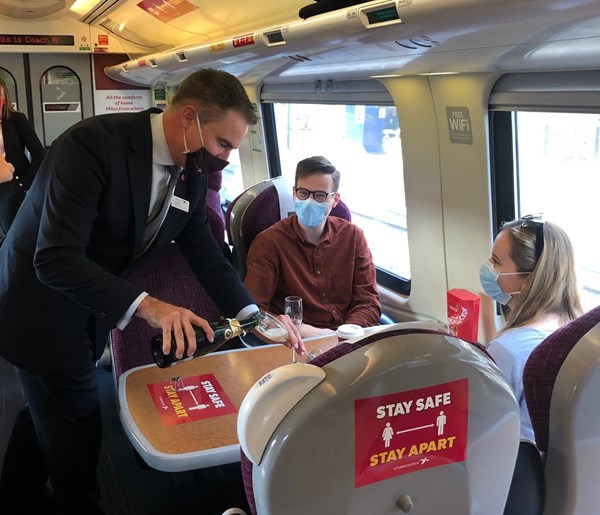 Tom said, “It’s great to give back to a couple who have been vital during these trying times. We are lucky to operate across some of most beautiful parts of the country from Aberdeen to Penzance. Brett and Victoria have started a new chapter in their lives despite the pandemic and we wish them all the best travelling in style to their honeymoon. Going by train will mean the couple can relax after a busy few months and hopefully the champagne helped too.”

They tied the knot on 27 September after meeting in their final year of school six years ago.

Victoria said, “This has been so exciting, I didn’t expect to get a reply when I emailed Tom back in July. Before Covid, I would regularly travel with CrossCountry and have nothing but praise for the staff. We are really looking forward to our first holiday together as a married couple and want to thank Tom and the team for the lovely surprise.”

They have more wedding celebrations to come as they will be visiting Brett’s family next year in America.

CrossCountry’s network is the most geographically extensive passenger rail franchise in Britain. Stretching from Aberdeen to Penzance and from Stansted to Cardiff, it calls at over 100 stations. Based in Birmingham, CrossCountry connects seven of the Britain’s 10 largest cities and delivers 298 services every weekday, equating to some 40 million passenger journeys a year.

CrossCountry is part of the Arriva group, one of the leading providers of passenger transport in Europe. Arriva employs over 46,000 people and delivers over 2 billion passenger journeys across 14 European countries each year.