Volunteers from the rail industry have repaired a memorial garden honouring the victims of a level crossing accident on the West Coast main line more than 50 years ago. The site in Hixon, Staffordshire, commemorates a tragic collision between a train and a low-loader lorry on a level crossing in the village in 1968.

In recent years the garden has become overgrown and damaged. Building on the excellent work already started by the local community, staff from Network Rail and CrossCountry stepped in to help make the garden a fitting memorial to those who lost their lives in the rail disaster. 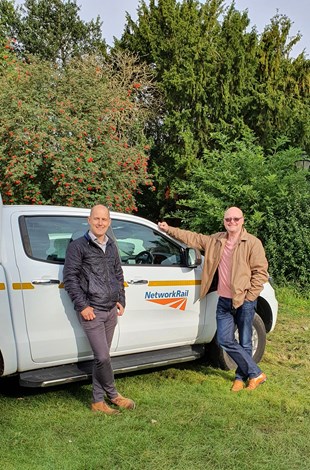 John Robson, CrossCountry Regional Director, who led the work, said: “The railway in the UK is the safest in Europe. Tragedies such as this one are rare. But our industry must remember events like these in order to understand the lessons learned, and why we do things the way we do. It is a real privilege to work alongside Adam and other Network Rail colleagues to support the villagers of Hixon so that we never forget those who lost their lives.”

Adam Checkley, Senior Programme Manager for Network Rail, said: “When we heard about the state of the memorial garden, it was only right that we lent our support to make it a peaceful and pleasant place for local people to use and for those to remember loved ones who lost their lives. Thankfully, level crossing safety has come a very long way since 1968 with stringent measures in place to prevent such tragedies between vehicles and trains happening today.”

Since the memorial garden work, train operator CrossCountry and Network Rail are working closely with the community on a series of other memorial plans to reflect the importance of the accident all those years ago.

We own, operate and develop Britain's railway infrastructure; that's 20,000 miles of track, 30,000 bridges, tunnels and viaducts and the thousands of signals, level crossings and stations. We run 20 of the UK's largest stations while all the others, over 2,500, are run by the country's train operating companies.

Usually, there are almost five million journeys made in the UK and over 600 freight trains run on the network. People depend on Britain's railway for their daily commute, to visit friends and loved ones and to get them home safe every day. Our role is to deliver a safe and reliable railway, so we carefully manage and deliver thousands of projects every year that form part of the multi-billion pound Railway Upgrade Plan, to grow and expand the nation's railway network to respond to the tremendous growth and demand the railway has experienced - a doubling of passenger journeys over the past 20 years.