The Best Secret Bars in Manchester

Ssshhh... Do you want to know a secret? We know where to find the top secret bars in Manchester and we want to tell you all about them!

And we’re not talking about those so-called “secret” bars that are little more than an irritating gimmick. Tricky to find, they have a less-than-welcoming ambiance when you eventually stumble through their gloomy entrance.

So, we’re delving into places that aren’t afraid to take risks - venues that even if you manage to find the front door, you still have to work to get inside. However, once in, the experience is one that you’ll never forget. These are best Manchester bars are a secret we want to share… 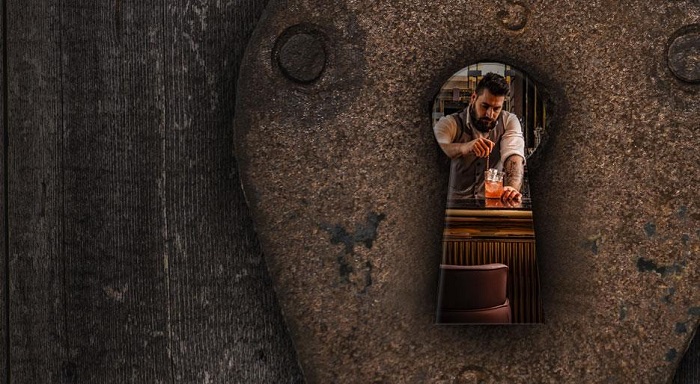 A little bit of mystery can lead to a whole lot of fun - good, clean fun in the case of the first Manchester bar to make it onto our list. A well-camouflaged drinking den, The Wash House Manchester is one of the city’s best-kept secret drinking establishments that on the face of it is nothing more than a pokey laundrette – a really, really fun laundrette. 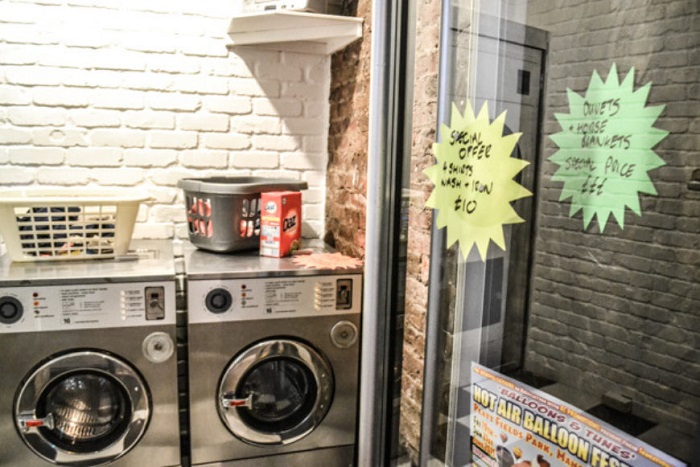 The Lion, The Witch & The Washing Machine

The Wash House Manchester is a Tardis that sells cocktails. It's a place that C.S. Lewis may have written about and somewhere you might expect to bump into a lion and a witch. Simply replace the wardrobe with a washing machine and you have one of the best bars in Manchester.

We told you it was fun!

Wickedly delicious cocktails are consumed on the classy leather-clad seating, amid the resonant base of deep house music. Cocktails bars in Manchester taste so much sweeter when you have to work to find them.

Be sure to leave your laundry at home, as there’s no washing, no drying and definitely no ironing allowed in this Manchester bar! As you might expect from such a dedicated covert bar, you do have to “book a machine” in advance if you want to get in.

Scurry around the side streets and you’ll stumble upon unusual shops and underground drinking holes. Even these secret spots aren’t enough to quell the inquisitive nature of the most dedicated of explorers, but Dusk Til Pawn is. If you want to tour Manchester’s secret bars, then this one has to make your must-see list. 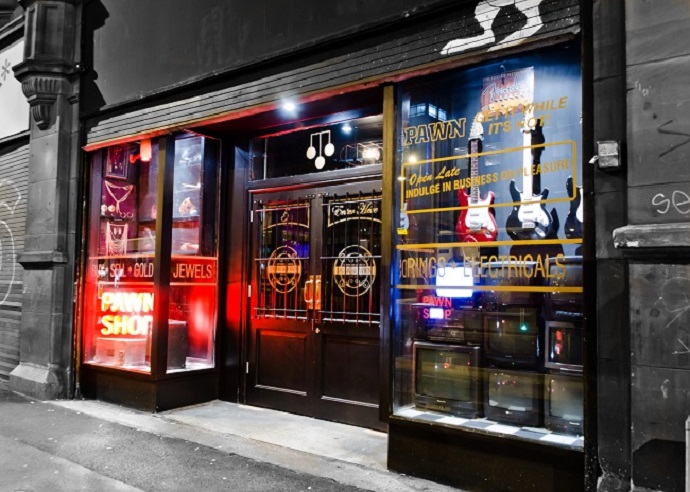 If you are sampling the Manchester nightlife and you glee in all things ‘different’, Dusk Til Pawn is the place for you. With a shop front styled as a neon-lit pawnbroker, complete with metal bars that stand guard over the doors and flashing signs advertising their false desire to buy your old ‘gold for cash’, this Manchester bar is certainly one of the most unique.

Here’s the crux of it:

And you have one very unique pawnshop indeed. 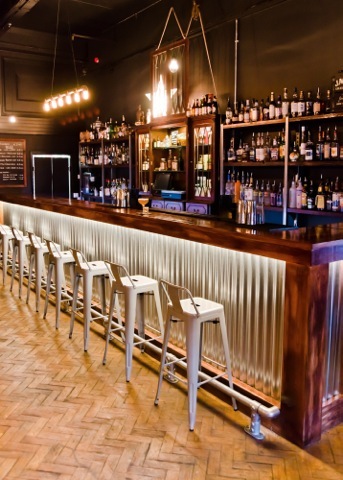 You’ll find vintage guitars hanging on the walls next to a huge collection of old-fashioned, boxy televisions. Its antiquated look is just-the-right-amount of tack on the outside to lure you into what is a surprisingly stylish establishment hidden behind the façade of a pawnbrokers.

Manchester bars offer a little bit of something for everyone and while anyone can dance the night away at a live gig at the Manchester Arena, only those with a real thirst for adventure will really get to know Manchester inside out. If you want to experience Manchester nightlife at its best, we suggest a trip to Cane & Grain, where the ribs are as awesome as the bourbon, as the beer, as the rum – you get the picture. 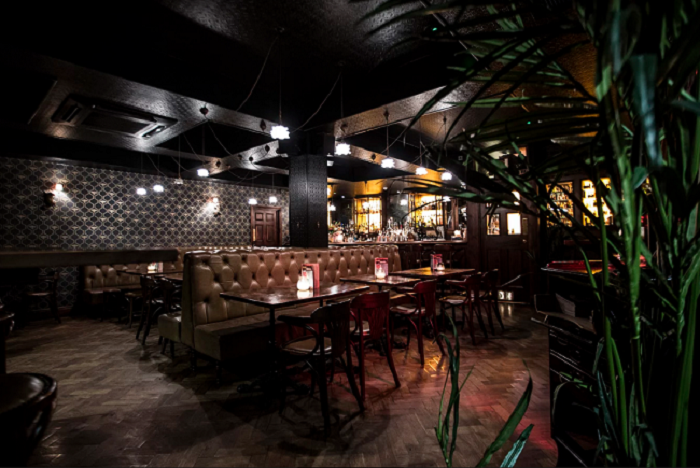 Cane & Grain is the king of Manchester’s dirty-food scene, which basically means its rib-filled menu will make you drool as you read it. Some come drenched in a deliciously sticky sweet sauce made from Dr Pepper, while others hail from more traditional recipes from Memphis to St Louis.If you love ribs – we promise this is a rib joint like no other.

As far as Manchester bars go, this wacky venue has an unassuming entrance with limited signs to indicate what trendy treats await inside, which can make it tricky to find tucked away in the city’s bustling Northern Quarter. 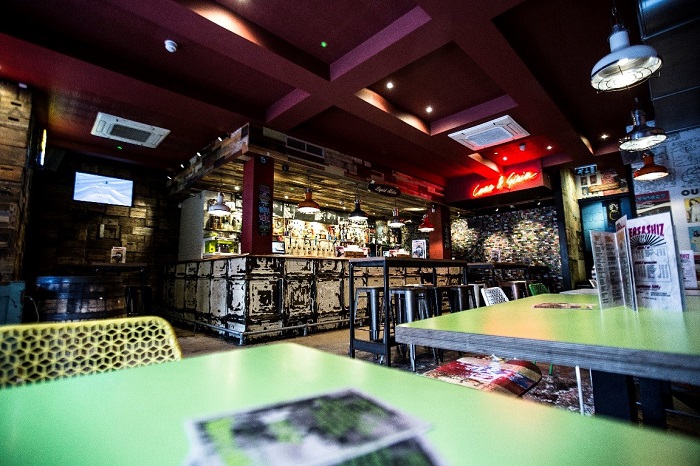 Once you find it, you’ll see that it is set over three wonderfully different floors, with equally distinctive names:

Retro 80s skateboarding posters, along with bits of old skateboards, adorn the walls of the Rib Joint & Tap Room, while the Science & Industry level has a secret bar that can only be accessed via a hidden door craftily disguised by old wooden beer crates.

The top floor is known as The Liars Lounge and only at Cane & Grain can one can expect to bump into zombies as you drink your body weight in rum, while surrounded by fiery cocktails. This restaurant-cum-bar unashamedly owns its weird persona and will whet the appetite of any red-blooded carnivore, rum-fan or cocktail groupie. 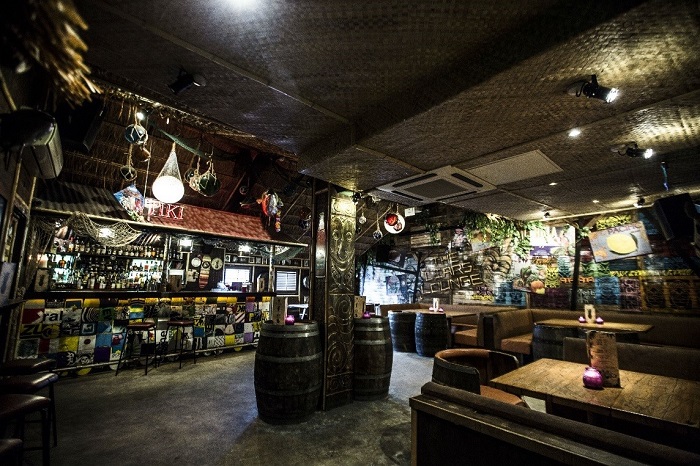 If you want to enjoy a truly unique experience, then you will need to head slightly out of the city into Salford, where you will find a hotspot so elusive that even many Mancunians don’t know it. The Islington Mill is an ultra-hip venue with an artsy vibe, often described as a place where all the uber-cool people hang out. It is certainly one of the best bars in Manchester. 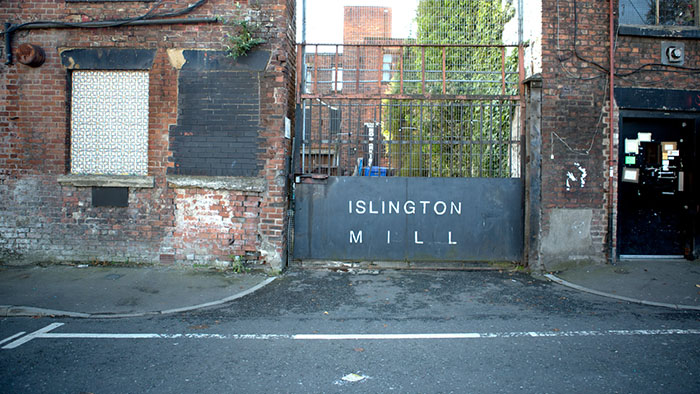 On the outside, this five-storey tall former cotton mill looks like nothing more than a crumbly derelict building. Intriguingly, the longer you stay, the more you appreciate that its dilapidated appearance adds to its creative personality, which is how it draws in artistic souls from all around.

We caught up with Verity Gardner, Director of Fat Out’s Burrow (the event space at the Islington Mill) who lends her imaginative psyche to the mill’s event line-ups, to find out what she is most excited about in 2017: 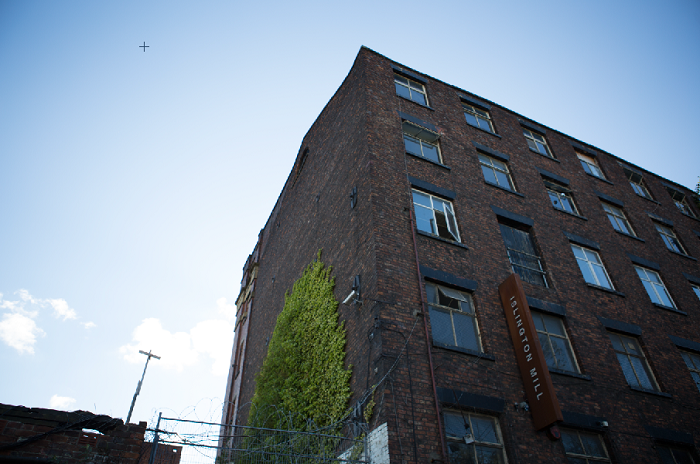 Question: We see you have a busy 2017 lined up with lots of great upcoming events. Which ones stand out to you as some of the most exciting?

Verity: “We have our two flagship festivals in April: “Fat Out Fest” over Easter weekend and “Sounds From the Other City” on Bank Holiday Sunday - both celebrate DIY music, art and curators and we are working with local artists and promoters as well as national and international collaborators on both events.”

She went on to add: “We are immensely proud of both these festivals but people can also check out our other upcoming events, like the “Daniel Wakeford Experience” in May and “High Hoops” in June.” 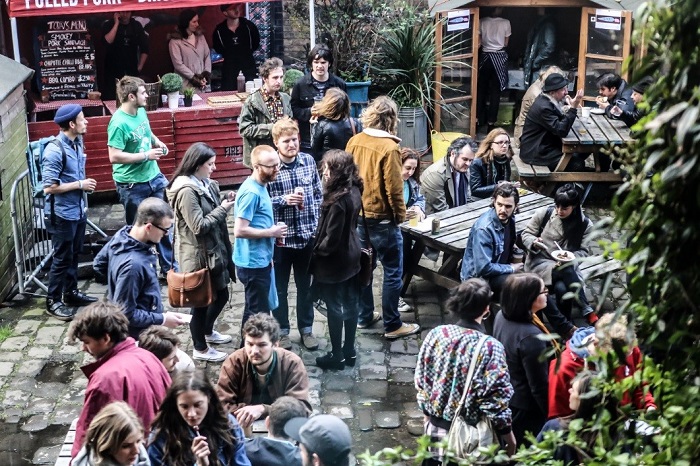 The bargain beer, late night curfew and off-the-cuff originality, ingeniously mixed with its trendy non-descript building, give this old mill a hip atmosphere and make it one of Manchester’s secret bars that is well worth tracking down.

Harder to find than the proverbial needle in a haystack, Under New Management is undeniably funky and unlike other speakeasies that can feel too-cool-for-school, this bar has a warm and welcoming atmosphere.

Here are a few reasons why you should check it out:

Under New Management makes you feel tingly with a sense of naughtiness and apprehension in equal amounts. 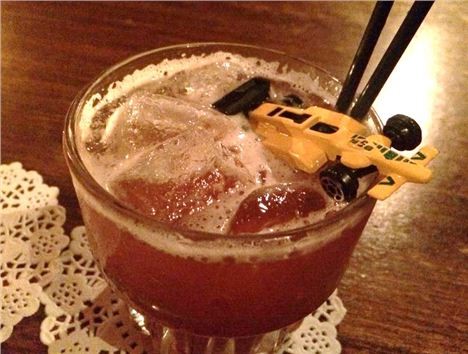 Leave conventionality at the door: forget umbrellas and straws, and instead prepare for your cocktails to be decorated with toy cars.

Hunt down this secret spot found just off Chapel Street on Barlow’s Croft, ignoring the sights along the way that can only be described as reminiscent of a scene from “Snatch” and pop into this hidden bar that makes for one very cool, covert night out.

An eclectic melting pot of cultures and societies, Manchester is a bustling metropolis. If you’re truly prepared to leave your reservations at the city limit, you may even find yourself drinking in a block of old toilets, now better known as The Temple and one of the best bars in Manchester. 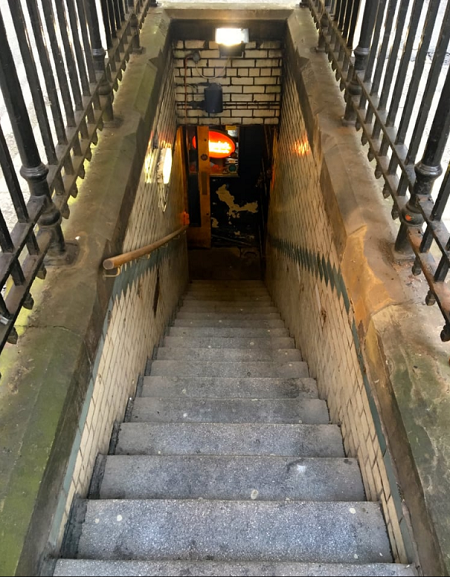 Beer in a Bathroom, Anyone?

This quirky, pint-sized bar is full of eccentricities and its roots as a former public bathroom add to its bizarrely captivating appeal. It revels in its unconventionality, boasting a peculiar charm that cements it as the Johnny Depp of the Manchester nightlife scene.

One of the best bars in Manchester, The Temple is located underground below the hubbub of Oxford Road and is home to a jukebox that blasts out tunes from local bands, giving it a funky rock ‘n roll atmosphere. As weird as it is to drink in an old toilet block, it certainly makes for a great talking point.

There is a vast choice of foreign bottled beers to choose from and as if it wasn’t already trendy enough, the walls are adorned with graffitied one-liners giving it a shabby chic feel straight out of 1970s New York.

From bars that look like laundrettes and pawn shops, to cocktails that are served with a side of car, Manchester’s best secret bars offer more mystery and fun than anywhere else in the city.

CrossCountry can take you to Manchester to check out the best underground bars in the city for less with our Advance Tickets service. We offer discounted tickets and a guaranteed seat, so you can travel to some of the UK’s most popular destinations for less. Check out our Advance Ticket service and get up to 70% off your next train journey only with CrossCountry.*

*Applies to CrossCountry journeys only. Average saving calculated by comparing Advance standard single ticket prices, purchased before the day of travel, for 4,973 CrossCountry journeys to the equivalent price of an anytime standard single ticket. Advance fares are subject to availability, terms and conditions apply. Please see website for full details.