Most Famous Landmarks in the UK

If you were to look at a city from a distance, you’d most likely recognise it from its landmarks. Whether it’s Rome’s Colosseum or the Statue of Liberty in New York, landmarks give places an identity – a unique feature synonymous with the city, town, or even whole region. Few countries contain the wealth of landmarks the UK boasts, scattered across every corner of our island. If you’re ticking things off the bucket list, these are the most famous landmarks in the UK you can visit today. 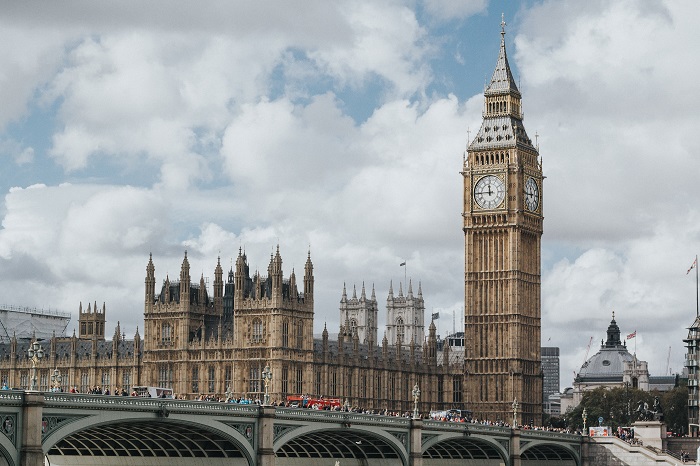 Quite possibly the most famous clock in the world, Big Ben – the name given to the bell within the Elizabeth Tower – dominates views of the Thames. It was completed in 1859, and towers above the Houses of Parliament in Westminster. Catch it on the hour to hear the chimes ring out from this iconic structure. 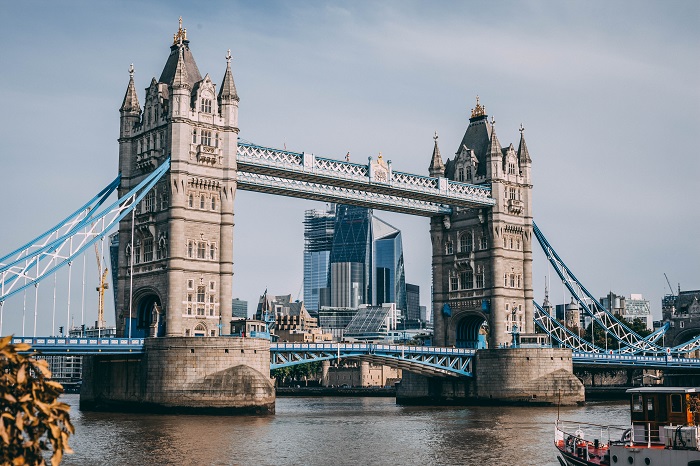 That Tower Bridge often gets mistaken for London Bridge is telling. One of the most beautiful bridges in the world, its blue steel structure and 19th century gothic architecture are immediately recognisable. Visit when a ship is passing through to experience the bridge at work, or experience the landmark lit up at night-time.

Angel of the North – Gateshead 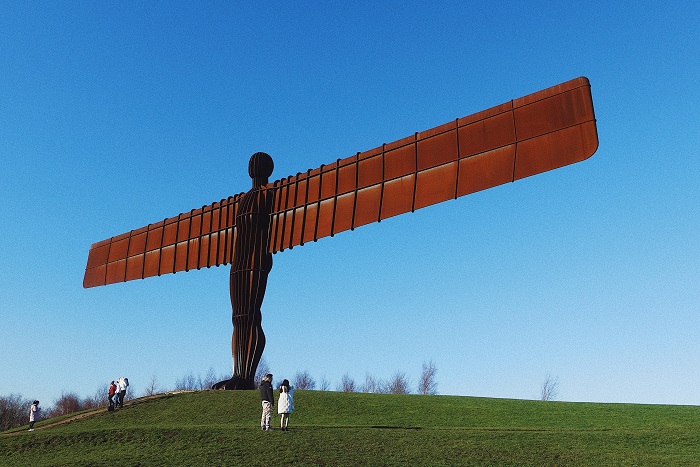 The Angel of the North is the UK’s answer to iconic landmarks like Cristo Redentor and the Statue of Liberty. Built by Sir Antony Gormley to represent the miners working in that area of Gateshead, it towers surprisingly high in the skyline. On a sunny day, the red copper contrasts beautifully with the blue sky. 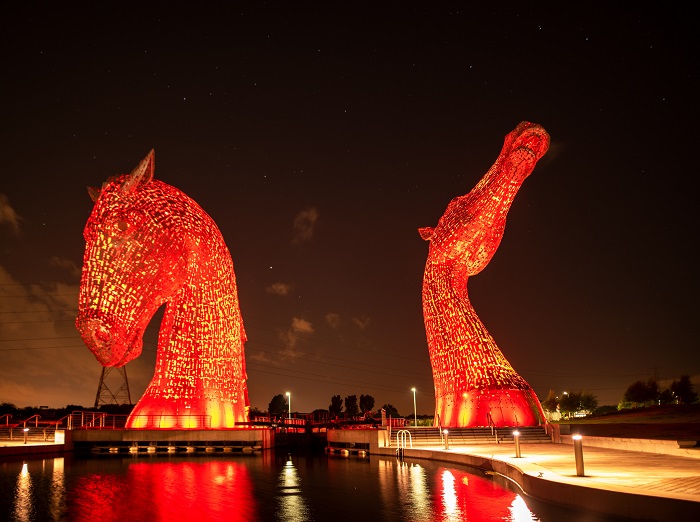 The Kelpies are two horse-headed structures along the Forth and Clyde canal, designed to represent Scotland’s horse-powered heritage. They’re giant, iconic sculptures, forming a gateway between east and west. Take a tour inside the landmark or visit at night to see them illuminated with a purple glow. 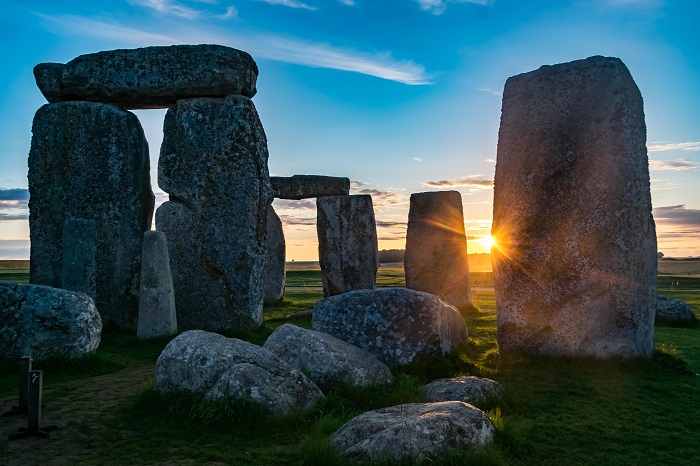 Aliens? Giants? Probably not. But, while we’re certain Stonehenge is a manmade monument, scientists are still unsure as to how – with such limited technology – it was built thousands of years ago. This all adds to the mystique around this fascinating UNESCO World Heritage Site. Visit during the summer or winter solstice for the annual festivals. 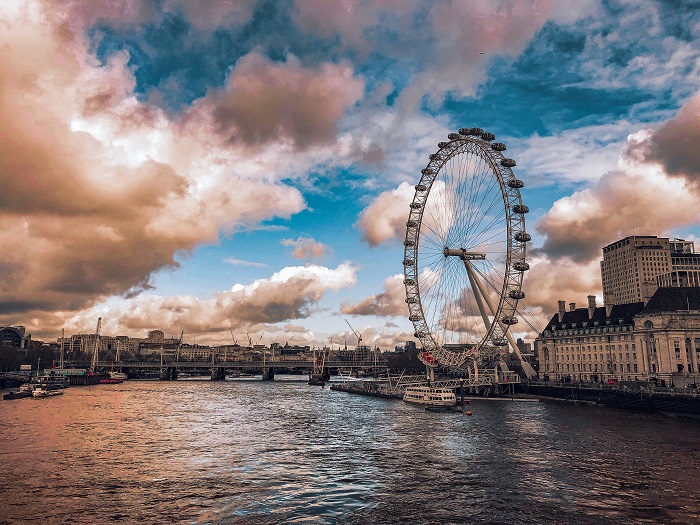 The Shard may have pipped top spot for the best view of London, but the London Eye still offers a magnificent view of England’s capital. But that’s not the only thing the Millennium Wheel has to offer; it’s a stunning UK landmark and the most recognisable feature along London’s Southbank. As the UK’s most popular paid tourist attraction, be prepared for hustle and bustle when you visit. 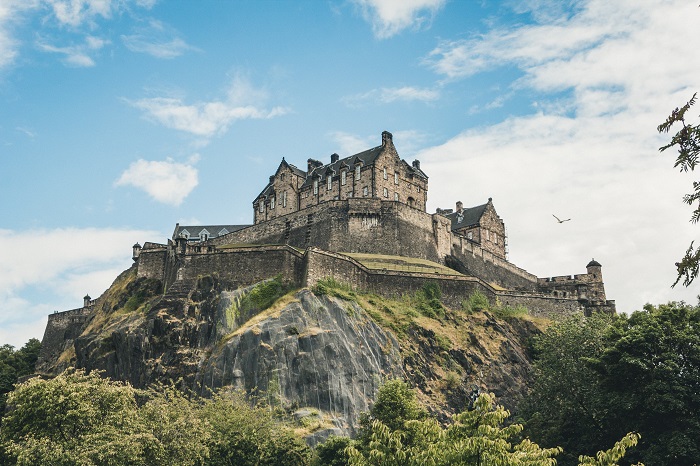 Sitting majestically atop Castle Rock, Edinburgh Castle is a beacon of Scotland’s capital. It’s one of the oldest fortified castles in Europe and one of the most impressive in the world. Catch a glimpse of it as you exit Edinburgh Waverley, and make sure to visit during August to witness the incredible Tattoo festival. 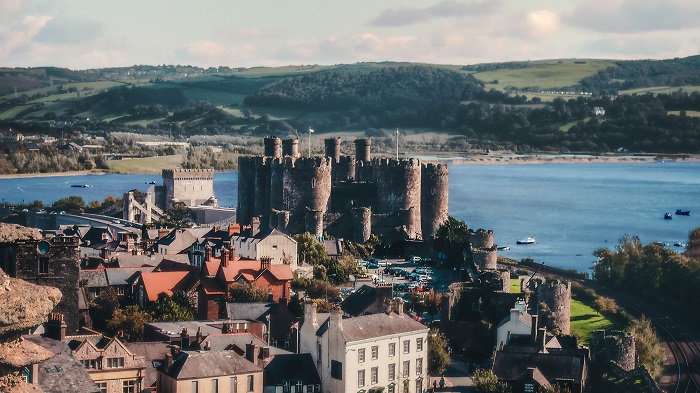 Overlooking the town of Conwy, North Wales, Conwy Castle is an impressive 13th century fortress built by Edward I of England. It’s perfectly situated next to the River Conwy, and on sunny days you can catch stunning views of Snowdonia’s mountain ranges. This World Heritage Site has a rich history that begs to be explored. 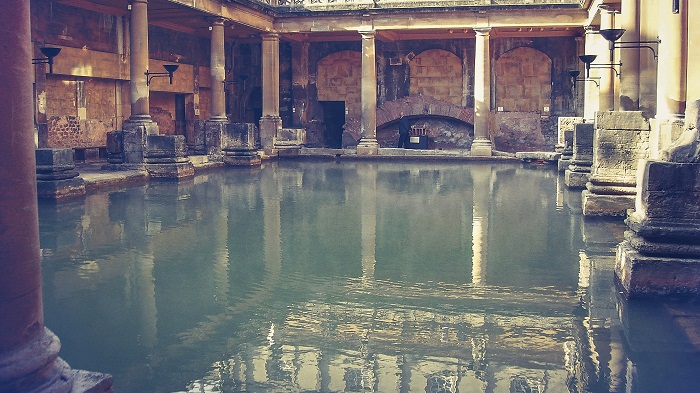 Few landmarks can boast they gave a city its name, but the Roman Baths have that right. Built around 70AD, the world-renowned taprooms and bathhouses can still be explored today, with a wealth of history to dive into. Situated in the hearth of Bath, the best time to visit the Roman Baths is late on a winter’s day. Fire torches, steam, and magnificent architecture? When in Rome… 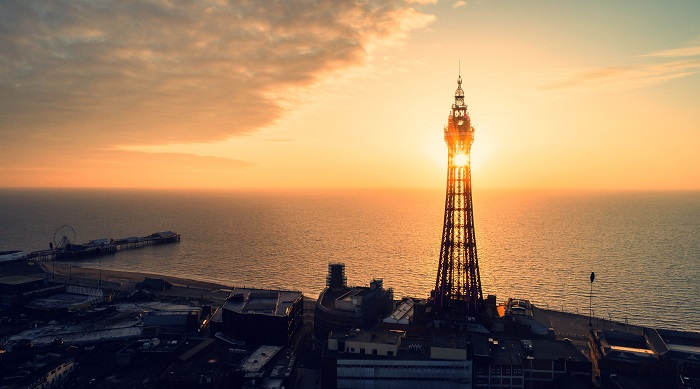 One of the most popular British holiday destinations, Blackpool is immediately recognisable from the iconic Blackpool Tower. The structure overlooks the beach and much celebrated funfair, and looks stunning when lit up at night. Explore inside for the best views of the Lancashire coast, the decadent Tower Ballroom, and several function rooms begging to be partied in. 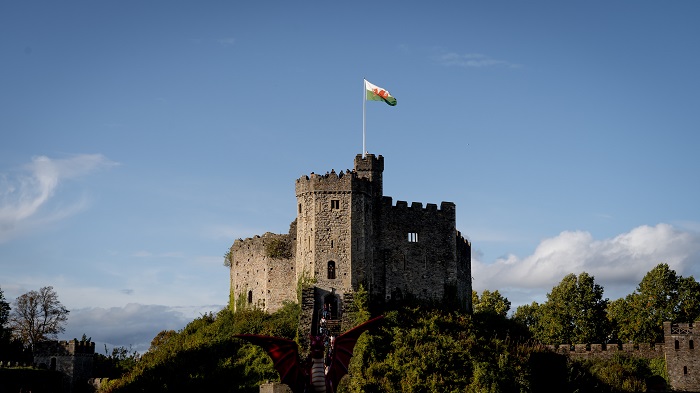 Wales’s capital has an abundance of recognisable landmarks, but few have the aesthetic impact of Cardiff Castle. Situated within walking distance to some of the city’s most popular streets, the fortress was built in the 11th century and boasts a dense history. Discover stunning Victorian Gothic architecture outside and delve inside for incredible views of Cardiff. 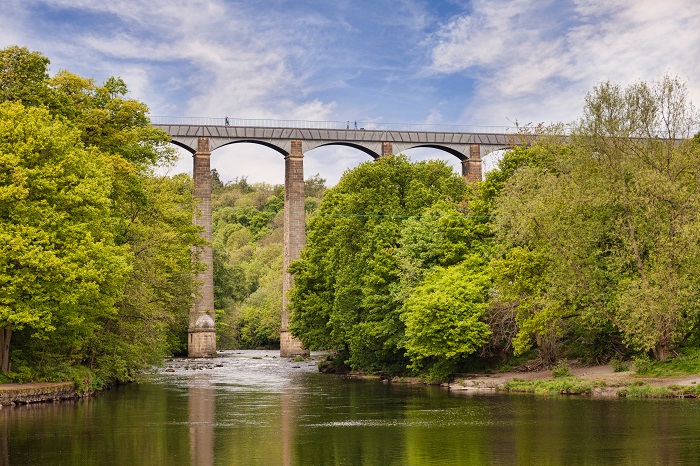 Built by the great engineer Thomas Telford, the Pontcysyllte Aqueduct was just the third site in Wales to be awarded UNESCO World Heritage status, and for good reason. Though its original function was to carry the canal above the Dee Valley, it’s now an iconic UK landmark that has to be visited. Take a boat along the River Dee to pass under the aqueduct for the best views. 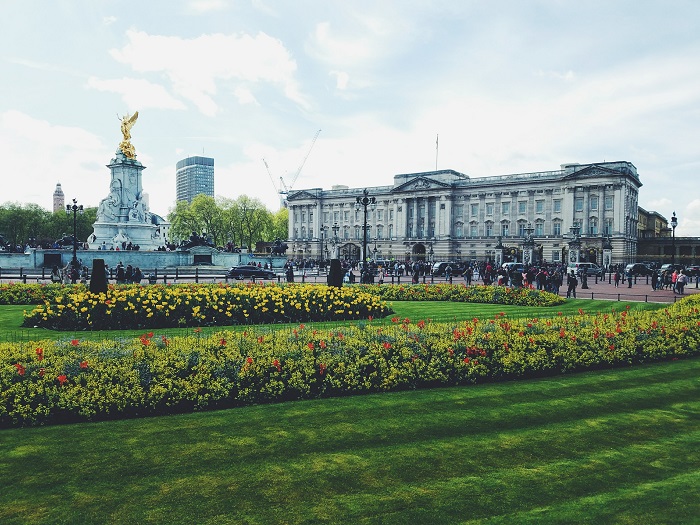 The official residence of Queen Elizabeth II, Buckingham Palace is one of the most famous landmarks in the UK, if not the world. It’s a majestic piece of architecture surrounded by stunning landscape gardens, but that’s not what most people visit for. The chance to see the Queen, the changing of the guards, and state rooms are what drives most tourism. 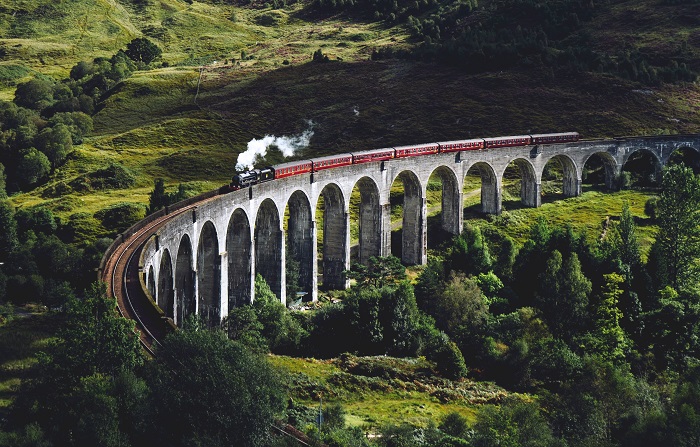 While the Glenfinnan Viaduct was a magnificent piece of architecture before 2001, it’s only recently gained the status as one of the UK’s most famous landmarks after appearing in the Harry Potter films. Its 21 arches and curved line are immediately recognisable if you’re a fan of the movies. Check train times before you visit – only three pass in each direction every day. 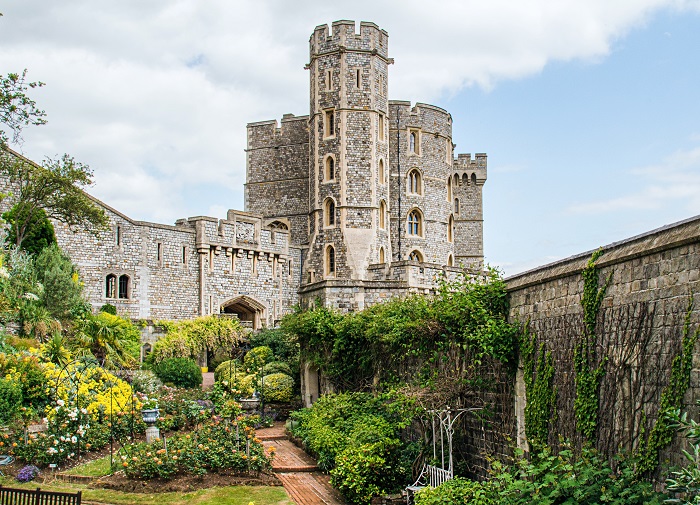 The oldest and largest occupied castle in the world, Windsor Castle is a stunning fortress surrounded by vast grounds and glorious gardens. It’s said the Queen spends most of her weekends here, which is reason enough to visit. But tours of the fabulous interior and incredible architecture make it a landmark not to be missed.

If you’re planning a trip to one of the most famous landmarks in the UK, don’t forget to book an Advance ticket via our website or our Train Tickets app for zero booking fees. You can also find information on how to get cheaper train tickets via our special offers page. If you need more information, you can contact us here.