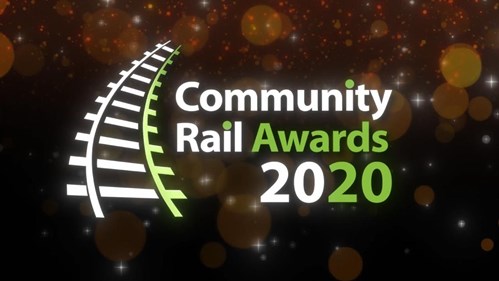 This year the popular awards, which are organised by Community Rail Network (CRN) that supports the work of CRPs across the UK, was held entirely online because of the ongoing pandemic.

CrossCountry sponsored the Marketing and Communications Campaign category, which saw Hereward CRP take second prize and Devon and Cornwall Rail Partnership take third, who are both supported by us.

We also saw success with Lymington and Brockenhurst’s ‘Food on the Move’ initiative coming first in the Best Community Engagement category, and the Backtrack competition that three of our CRPs were part of won the award for Outstanding Contribution to Community Rail. Both were directly funded by the XC Community Engagement fund.

The evening saw networking ‘rooms’ beforehand where people could find out more about the rail industry and CRP projects, and virtual parties after the awards to congratulate and hear from the winners.

Robert Nisbet, Rail Delivery Group’s Director of Nations and Regions co-hosted the night with Jools Townsend, Chief Executive of CRN. You may recognise Robert of being the voice of the rail industry on national news as well as being a former news presenter/journalist.

The night was also littered with guest presenters from across the industry dishing out the awards.

Speaking after the event, Tom Joyner said: “These awards are a great way to showcase the many things CRPs are delivering up and down the country. This year we were delighted to sponsor one of the categories, and especially pleased to see two partnerships we support do so well. In the midst of this pandemic it was uplifting to hear about these partnerships’ successes helping others and supporting their local communities.”

The full list of winners can be found here and if you’d like to watch the awards you can also find them on the CRN YouTube channel.

Next year they hope to host the awards in Southampton as originally intended this year.