Discover Hadrian's Wall on a day trip from Newcastle

It’s one of the most iconic ancient landmarks in Britain. An astonishing feat of engineering and organisation evidenced in its sheer scale. Built on the orders of the Roman Emperor Hadrian in 122 AD to mark the north-west frontier of the Roman empire, Hadrian’s Wall routinely tops the list of must-visit attractions in the UK.

It’s not just the impressive stone wall itself - running 73 miles from Wallsend in the east to Solway Firth in the west -  but also the various forts housing barracks and museums along the way that make it such a fascinating site.

If you’re keen to walk in the footsteps of a Roman soldier and discover more about this fascinating ancient landmark, read on for help on planning your trip. We asked Blue Badge Guide Laura Rhodes, who regularly organises personalised tours along Hadrian’s Wall, for her top tips to help you discover the best spots to enjoy at this UNESCO World Heritage Site.

Below you’ll find options for keen walkers, as well as those who prefer to see the more accessible sights associated with the wall.

If you are travelling on one of our services to Newcastle, there are connections to Hadrian’s Wall Country along the Tyne Valley Railway.

Staying in Newcastle for the weekend? Find out more about the city by visiting our handy Newcastle guide. Travel by train and enjoy savings on train tickets to Newcastle when you book Advance tickets with CrossCountry. 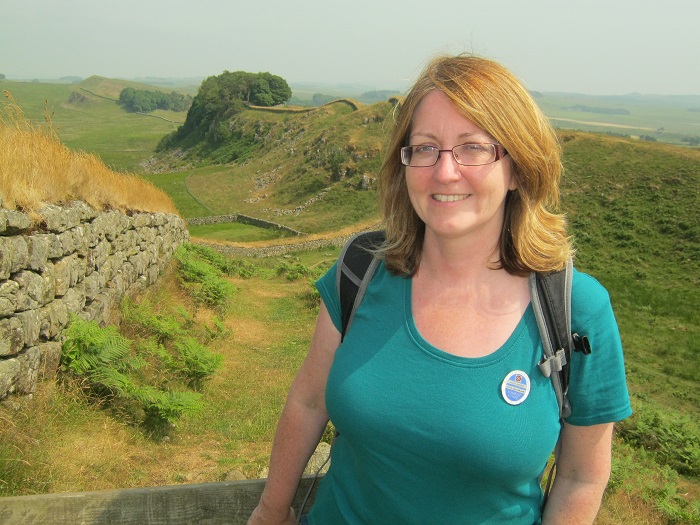 Walk the wall from Hexham

According to Laura, you’d struggle to see much of the actual wall within modern, built-up Newcastle itself (blame it on the development of the town since the Roman occupation over 1500 years ago) and most people head out to the surrounding countryside for the best views. If you’re short on time, Laura suggests a day trip from the city as the best way to see the most important sights.

“If you really want to see the wall in a spectacular setting, I would recommend taking the train (a 25-minute ride) from Newcastle to the town of Hexham to the west. From Hexham, catch the hop-on hop-off Hadrian’s Wall Country Bus AD 122 named after the year during which the wall was built. It covers quite a lot of the wall and you could do three or four of the sites along this route. The bus travels along Military Road from Chesters Fort where you can visit the forts of Housesteads and Vindolanda, the Roman Army Museum near Greenhead and then head back into the town of Haltwhistle.” 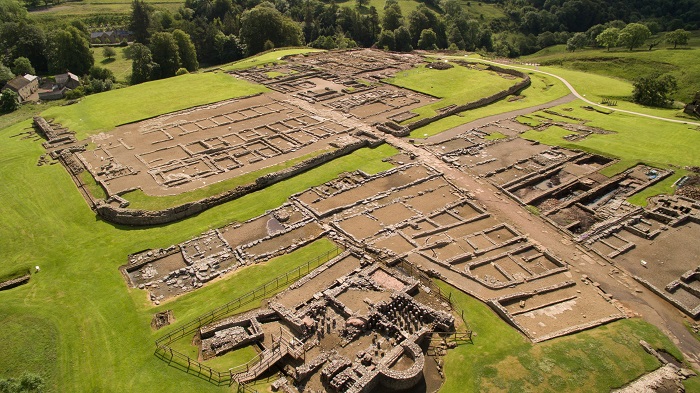 The fort of Vindolanda is the site where famous Roman writing tablets were discovered in the 1970s. These ancient postcards are considered the oldest surviving handwritten documents in Britain and they offer us a glimpse into the lives of the Vindolanda community almost two millennia ago. 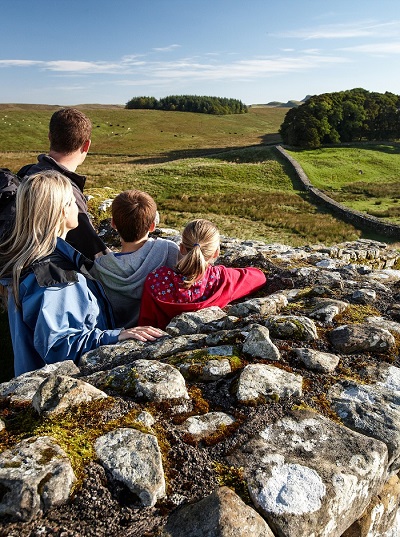 For a truly panoramic view of Hadrian’s Wall, a visit to the fort of Housesteads is a must. Standing along the north wall of the fort will give you the best views of the wall and the dramatic landscape it’s set in. Housesteads is also acknowledged as one of the best-preserved examples of a Roman fort and you’ll see plenty of original features such as a barracks block, hospital, granaries and even communal toilets.

There’s also a museum with a good collection of Roman jewellery, weapons and other artefacts. It also shows a short film about the origins of the fort.

FROM APRIL TO SEPTEMBER

Please Note: The Hadrian’s Wall Country Bus AD 122 only operates from April to October, so keep this in mind when timing your visit. You can find more details here.

While the countryside is where you’ll see the wall at its rugged best, there are also some great forts and museums that don’t require hiking up hillsides. Laura recommends the Great North Museum within Newcastle for its permanent exhibits of Hadrian’s Wall. There are also the forts of Arbeia and Segedunum which lie to the east of Newcastle. They can be easily accessed by the local metro train and then a ferry across the River Tyne - an exciting adventure itself if you’re travelling with little ones.

Segedunum is close to Wallsend Metro Station and Arbeia is about a 10-minute walk from South Shields Metro. You can also get the ferry to South Shields from North Shields. 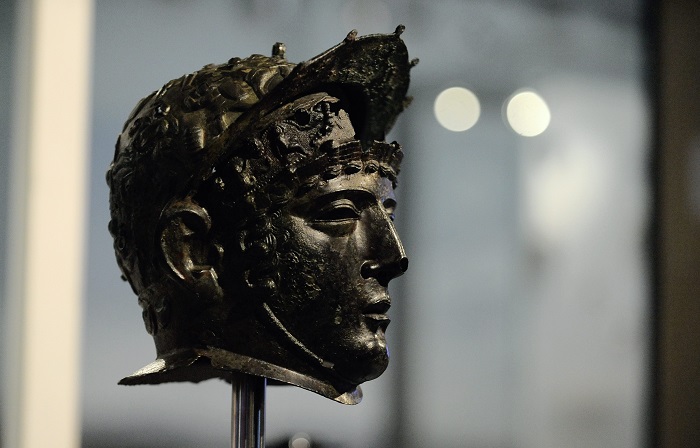 For an authentic reconstruction of the wall within Newcastle itself, head to the Great North Museum. Here you’ll find a permanent exhibition dedicated to the wall including a scale model running along the entire gallery with interactive displays, as well as an impressive collection of sculptures and inscriptions. There’s also an exhibition (only in 2017) dedicated to Hadrian’s’ Cavalry, where you’ll be able to get up close to real excavated Roman cavalry armour. 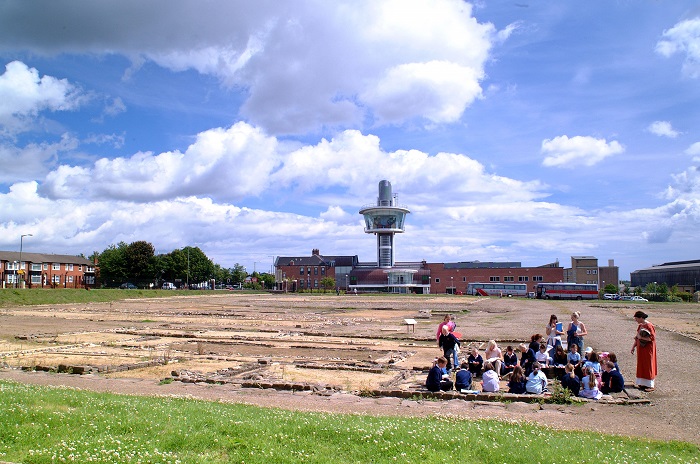 The fort of Segedunum at Wallsend was built to defend the eastern tip of Hadrian’s Wall. Segedunum literally translates to ‘Strong Fort’ and has stood the test of time since 122 AD. During its heyday, it housed 600 soldiers and operated as a garrison at the mouth of the River Tyne.

As the most extensive excavated fort along the entire stretch of the wall, Segedunum has lots to offer, including a full-sized reconstructed Roman bath house (currently being refurbished and can only be seen from the outside) complete with frescoed walls and Roman toilets.

You’ll also be able to look at an 80-metre stretch of the original remains of the wall - the highest surviving section that’s still visible to the public in Tyneside. There’s also a new centurion sculpture installed this year. 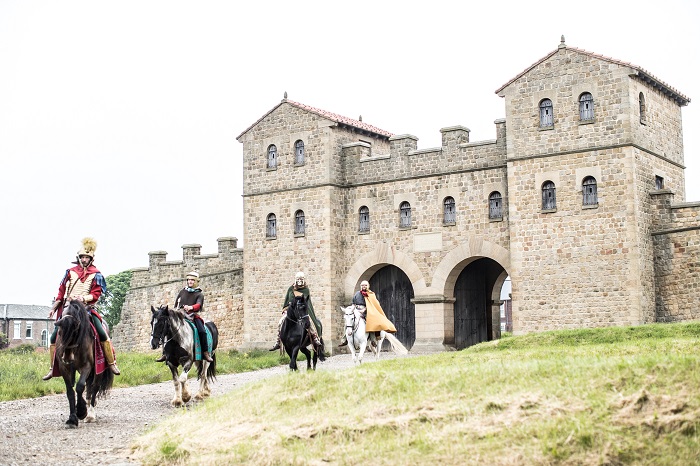 Overlooking the River Tyne, the fort of Arbeia was built to defend the main sea route to Hadrian’s Wall. It soon became the main maritime supply fort for the entire wall.

The fort itself now contains reconstructed Roman buildings such as a Commanding Officer’s House, a soldier’s barrack block as well as a full-sized gatehouse. For a real glimpse of what life would have been like for the Roman soldiers of the day, Arbeia also hosts exciting recreations of gladiator battles and falconry displays.

Seeing the wall from Newcastle has never been so easy with CrossCountry. Remember to book an Advance ticket via our website or our Train Tickets app to enjoy zero booking fees.